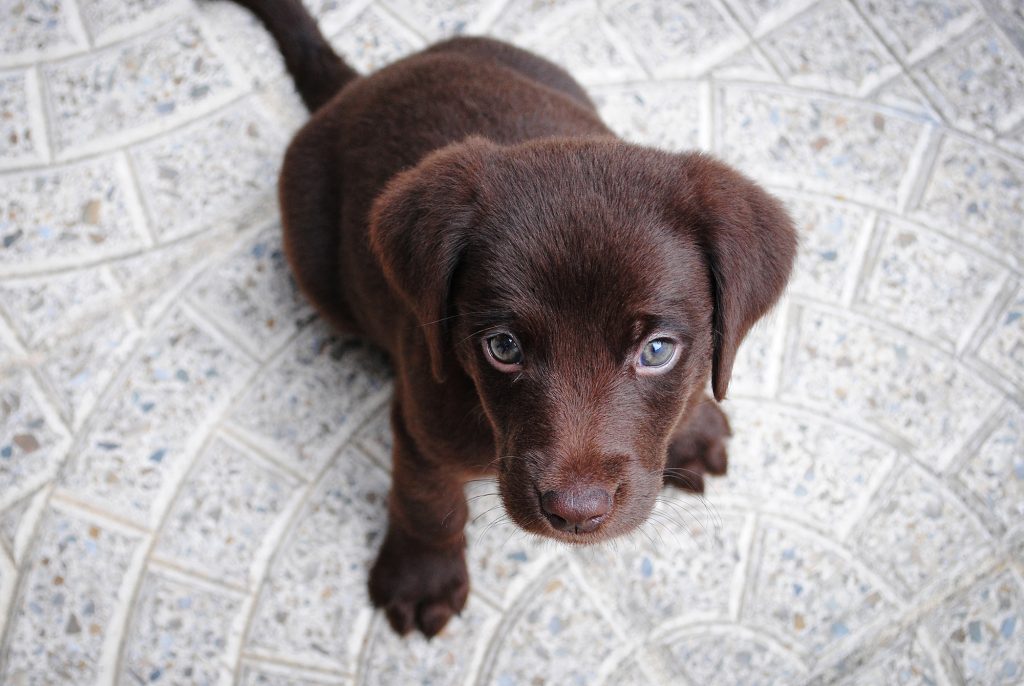 It was never something I desired to become — but after the events of last week, I am unfortunately now an expert in finding a lost pet. Therefore, in the hopes of helping other owners who have found themselves in similar devastating circumstances, I’m sharing the strategies I learned along the way.

My story began when our 4-month old puppy, Bash, wandered off the front porch and went missing for 42 hours. During that time, my life basically stopped and I got scary close to totally losing it. (Okay. I may have actually totally lost it.) But, I also spent many hours researching and getting advice from other owners, and feel that I have to share what I learned and what worked for us. Any one of these methods could be the way that you find your missing fur baby, so I suggest utilizing as many as you can afford. Also, never give up hope! It’s so easy to imagine the worst when it comes to your lost pet. But know there are countless stories of reunions happening days, weeks, and even months after separation.

Free Services – Get on these FIRST!

One of the first things I did, (once I finally accepted that Bash was gone) was put out a quick post on Craigslist in both the Community > Lost and Found section and Community > Pets. Use a title that will capture attention like “MISSING PUPPY – Please Help!” and always include a picture. Some people check Craigslist and some don’t, but a lot of folks who find pets will scour these areas for matches.

I did not know much about this awesome App until we were in desperate need of help from our neighbors. But it was recommended to us by countless people — and for good reason! Nextdoor alerts all your surrounding neighborhoods of any missing pets. Just post in the Lost/Found section. You can also upload your pet to the “Pet Directory” that will give more information about your pet if anyone finds him or her.

I found that this App seems to be more popular in Texas, so you live in the LoneStar state, you may want to give this a shot. It didn’t do much for our case but, again, we wanted to leave no stone unturned. FidoFinder has more dogs closer to our locality, but still not the most popular option we came across. As a tip: Do not pay to add your pet’s picture when prompted. After a little time goes by, they will email you permission to add one for free.

Your local Facebook groups are a fantastic community of people wanting to help reunite you with your pet. Here in OKC we have a few different ones. Do a little research to find which groups are most popular in your region.

Fliers may seem a little passé but they can actually work! We not only got a text from a guy who saw our flier at Walgreens, but a phone call from a girl (whom I don’t even remember handing a flier to) who claimed she had found Bash. Neither lead turned out, but I was still impressed that the impact landed.

Post fliers on telephone poles around the area your pet was last seen. You never know who may see it! I also suggest immediately passing out fliers to neighbors in the vicinity and walking around the streets to talk with people out walking their dogs or sitting on their porches. Even the mailman could be a good reference. Don’t forget to post fliers at local veterinarian offices, dog parks, stores like PetCo and PetSmart, and any nearby business that will allow you to leave up a flier for a few days. (ie. Walgreens made an exception for us.)

You can get a flier made quickly from Helping Lost Pets. 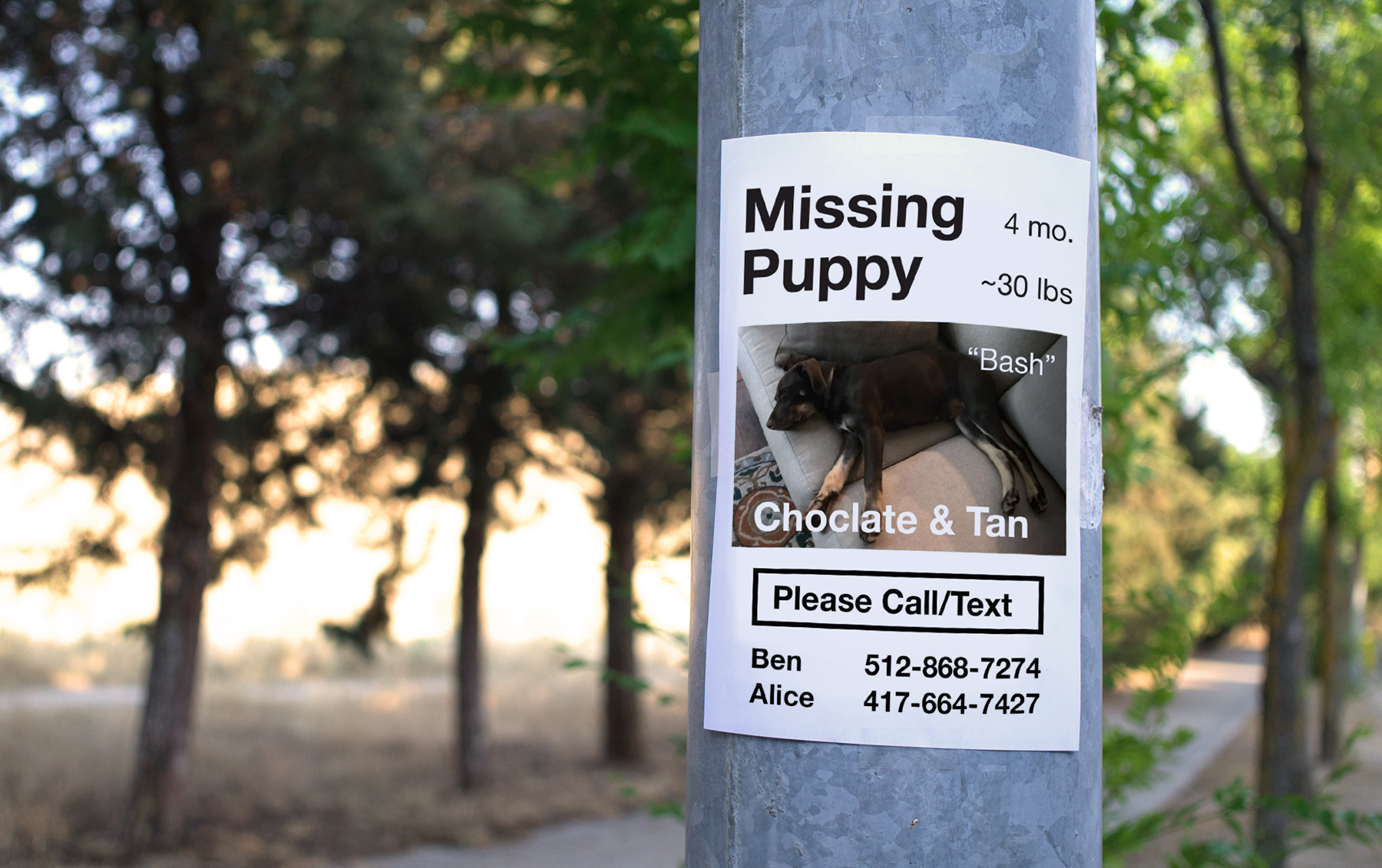 Along these same lines… Another idea I came up with, but never had the chance to follow though on, was to put out yard signs. You can purchase corrugated blank signs from Lowe’s and Home Depot, paste your pet’s photo on both sides, and write MISSING clearly and legibly with your phone number. Then ask as many people as you know if they would consider putting one up in their yard. The closer to a busy thoroughfare, the better.

It may sound crazy, but there are still people who would not think to look online for pet owners. Older generations will likely be checking your local newspaper instead. Place an ad for free online in The Oklahoman or by calling (405) 475-3000.

Paid Services – When all else fails…

I still don’t totally understand how PawBoost operates, but I do know it gets results! You can sign up for free and an ad will be posted to their social media channels as well as emails to anyone who has subscribed to them. And trust me, A LOT of people pay attention to these. They also have three different packages as expensive as $99 that do various other alerts for your pet. I eventually ended up paying for their bottom tier package because over 24-hours had gone by and I was getting increasingly worried. I’m not sure exactly what that did for us except maybe a boost for our ad and faxes to local veterinarians.

I did not end up using this service but was keeping it on the back burner if more than a week had gone by. It was suggested to me by another owner who found his cat this way after a month of separation.

One service our local shelter offered was to send postcards to a selected radius of neighbors from the spot your pet was last seen. It was fairly pricey. But since I have Adobe software, access to the MLS for addresses, and know a guy who offered this service affordably, I decided to make my own. We were actually in the process of having them printed when we found Bash. However, the home of the woman who had taken him in was on my address list so she would have gotten a postcard within a couple days regardless. This could be very useful if you are fairly certain your pet didn’t stray too far.

Consider offering a reward for his/her return. If someone has taken in your pet and is planning to keep them, they might be more motivated to action if they will be compensated. Update all your previous listings (Craigslist, Facebook, etc.) with said REWARD.

I’ve saved [our] best for last because Facebook Ads is eventually how we located Bash. Now, first to clarify… Facebook Ads are different than a boosted Facebook post. (I’m lucky because my husband does these for a living) With only a budget of $20/day, we had a projected reach of 4,800 impressions to our targeted area. We actually only ended up spending $9.00 total because we were notified of his location within the first 12 hours of it going live. Definitely worth the money when you consider that most people are on Facebook nowadays.

Be sure to check in with your local shelter or shelters daily. If someone has found your pet and was unable to keep them, they would have likely taken them to the “pound” where they are safely waiting for you to come take them home. I won’t lie, it was a bit traumatic for me when I went searching through the faces of literally 600 dogs. But absolutely worth it to find your pooch.

Also, before you go to sleep, put out your pet’s bed and favorite toy with some food and water in the spot they went missing. If they are able to find their way home, they may discover some familiar scents and stay awhile. This one also gave me all the “Homeward Bound” feels. I probably checked our front porch 15 times the first night, imagining I would see Bash bounding through the front yard toward me like Shadow.

And lastly (as if I’m in any position to give this advice), STAY CALM. Take care of yourself first so you can be strong and strategic in your efforts to locate your pet.