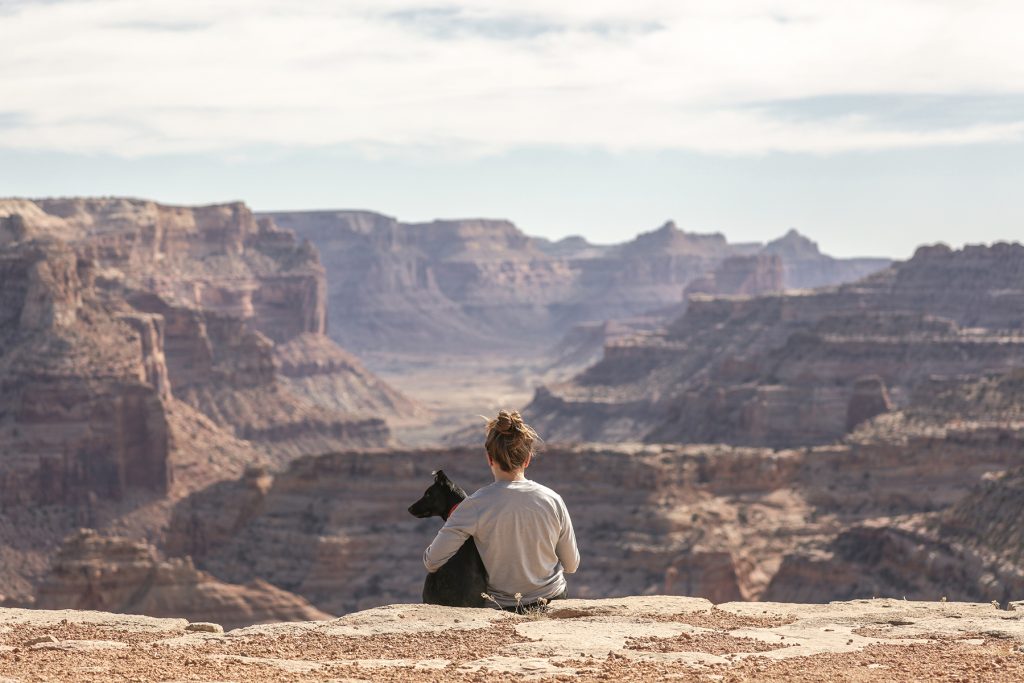 When it comes to having a fur-child, dog moms can be a little over-the-top. And between the baby talking and grooming techniques that must not be mentioned in this article, I should know as well as anyone. These puppies of ours are basically like human children… only dog-shaped and capable of being put in a crate without it frowned upon.

We think about our dogs ALL the time and go to extreme measures to make sure they feel loved. But when you really focus on some of the nuances we have in common as dog moms, you will begin to realize that we may just be, ever-so-slightly, crazy as fluff. Here are 10 things we do that illustrate it best!

Beds, couches, food… you name it. If I’m privy to a luxury, so are my pooches.

I have made up so many random noises and sounds that my poor dogs probably don’t even know their actual names at this point. While their formal names are Isabelle and Sebastian, they go by Belle & Bash in addition to these terms of endearment.

For Belle: She started as “The Little Girl” which quickly became “The Little Growl” which then turned to “The Leeto Growl.”  And it only went downhill from there. “Leeto” to “Lilo” to “Neeno” to “Neto” and currently at “Lilo Lilo” and “Neens.” She will also go by “Monsieur Belle-Belle” on occasion, “Ja-beau” (pronounce Sha-Bow), “Baby Seal,” and “Mew.” And, of course, songs to accompany each of those.

For Bash: He mostly goes by “Little Man” with other common choices being “Bashums”, “Jar-Jar” (on account of how he looks like Jar Jar Binks) and “Master Splinter.” He’s only six months old though, so there’s still time to tack on a few dozen others.

3. We buy 3M lint rollers like they’re going out of business

If I had a Sam’s Club membership, it only would be to buy lint rollers. Although they are mostly used to no avail, I will spend entire rolls to get hair off of various upholstered items around the house. All the while, not complaining. Because I love those little fur-balls with all my heart.

4. We become their biggest advocates

Maybe what this looks like for you is an unspoken club among other dog moms for your pet’s breed. Or 30 hashtags on your Instagram photo all sounding something similar to #dalmationsofinstagram. For me, it was a really unexpected, yet fervent feeling of responsibility to speak up for my dog. I had never given a second thought to pitbulls before we got Belle. But now I find myself wanting to beat people over the head who have prejudice against them. In fact, I tell my husband all the time I would run a pitbull rescue farm if we had the money and resources. They are totally misunderstood, and Belle is no exception. But she’s also the most loyal and compassionate dog I’ve ever been around. So (ahem) Springfield, MO… get your act together and don’t make me come up there.

5. We have skewed priorities on finances

Oh, what’s that? Ben wants new Crossfit shoes? Sorry, too expensive. But, wait… Belle hasn’t pooped in three days?! Take my money and get that girl an X-ray! (based on the true story when we discovered she doesn’t like mud)

6. We overreact to everything

Fitting right along with my example from #5 is the tendency to blow every minor ailment out of proportion. This is one attribute I feel will be exponentially worse when Ben and I have kids, because I fret and fuss over my dogs obsessively. They may just be a little bit lethargic, but in my head it’s a fatal disease. I’m embarrassed by how often I’ve consulted PetMD.com.

7. We go the extra mile… literally

Normal people out walking their dogs may take the easiest routes. Dog moms with reactive dogs cross the street, jump behind shrubs, and turn into driveways to avoid things that scare their dog. In Belle’s case, that’s literally everything — strangers, balloons, plastic bags, vacuums, aluminum foil, beach balls, brooms, guitars, large stuffed animals… I could go on and on. A quick jaunt around the neighborhood could easily end up being a 5K event.

8. We bring every conversation back to our dog

Sorry, not sorry. You’ve got a cute story about your kid and some pictures to share? I’ve got a better one about my dog and fifty accompanying photos you just HAVE to see.

9. We don’t notice when our dogs are annoying a non-dog lover

Bash may be begging for food between your legs or licking your hand for 10 minutes, but don’t expect me to chastise him. I’m too desensitized at this point. Plus, doesn’t everyone love scratchy puppy tongue and questionable-smelling saliva on their skin?

10. We think all dogs are great, but ours are the BEST 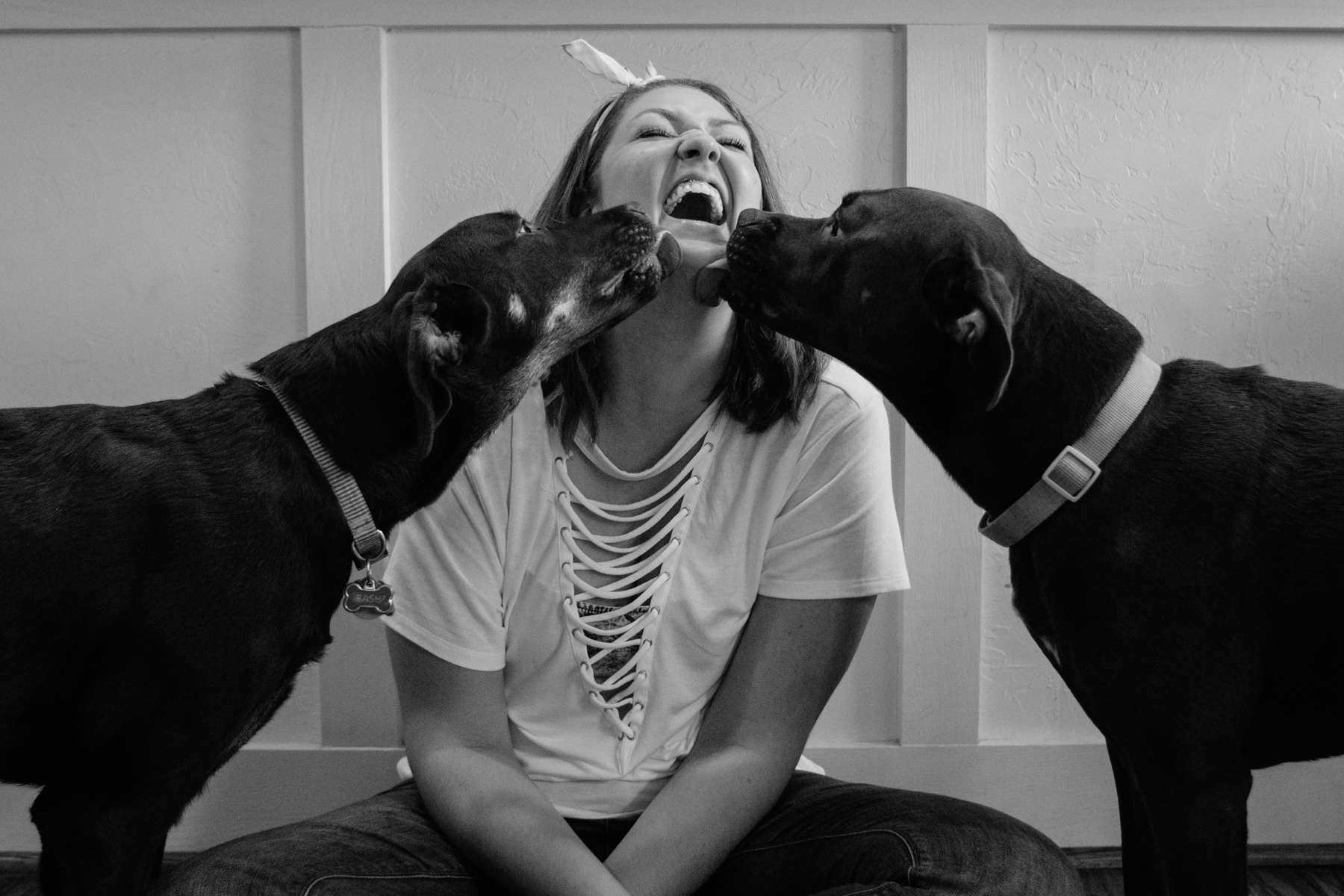 Hahahahahahaha….you crack me up, Alice Decker! There is a little more truth to this article than I care to admit, and I could actually add a few more crazy things I’ve done for my Jimi!

I feel like my favorite crazy thing you’ve done is cook the last few eggs for Jimi that Ben wanted to eat. Hahaha! He was so confused!

Umm, excuse me…this is not “crazy”. This is all totally normal, completely acceptable, and not-at-all strange behavior…and I don’t appreciate your tone, young lady! 🙂
I love this SO MUCH because there are so many times when you think “am I the only one that…?” Before we had our daughter, our fur-stborn was the most spoiled creature on the planet. We’ve since added another fur baby and we go to great lengths to teach our dauther that it is our job to love the puppies, be sweet to them and take care of them…not try to pull them out from under the bed by the tail. All I see here is that you will be WONDERFUL human parents one day and you will raise children who will DEEPLY love animals the way God created us to…with a few extra treats and belly rubs.

I love that you’ve made respecting the puppies such a priority for Ellie! She’ll grow up and be even crazier (wait, I mean more “completely normal”) than the rest of us!

Yes to all of this!!! & if you start the Pitbull rescue farm, Riggins & I will SO be there! Haha

As usual, I love your writing, but as a woman/parent who ONLY has had fur children, I especially love this. The only thing you didn’t write about was the saddest, but it is hard to write about something you haven’t experienced. I have realized as a Mom to dogs, that after you have lost one, you realize you will be a dog Mom forever, and most of us will HAVE to get another one. Some people do this sooner than others. I have known some that can not go through the pain ever again, but to me, the love far outweighs the pain. This all being said, I find myself wondering occasionally how much longer I will be allowed to keep my current wonderful ‘son’ in our life. We had our first 15 years, our second 12, and our current is now 9. I also find myself telling other people that when they lose a dog, it would NEVER want them to be sad, as dogs are all about love and fun. They would want you to find another fur baby to share your love and home with so you could continue their legacy of joy.
It is hard to lose a dog, especially your first, but once you realize that there are so many others just waiting for your love, you know you can heal with the help of a new one, and the memory of your old one. You will always love every one of them, and have favorite stories about each one, but never give up on finding another that fits into your life and your heart. There is always room.

I LOVE this post!!!
We were so upset when Amanda got Chance, who is a pit bull mix. We were so worried and couldn’t believe she would choose a scary breed when there were so many safer breeds to choose from. Boy were we wrong! Chance, and now Bug, are the sweetest most well behaved dogs we have ever met. Tim and I are crazy about them almost as much as our own pups.
We learned from that experience that it’s the owners not the dogs that can either be a problem or are not the right fit for that particular dog.
We can not imagine a world without our pups. They have made us and our life richer in so many ways.
Thank you for the laugh and for letting us know we are the only doggie parents crazy for our pups!